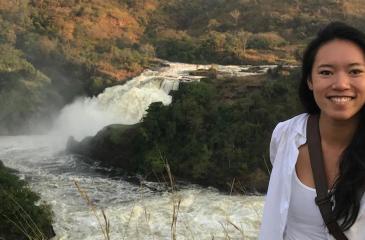 Ada Breitenbucher, a fourth-year student at the University of Minnesota’s Medical School, participated in the Global Medical Education and Research Program in 2019. Organized through the Center for Global and Social Responsibility, the program provides global health experiences for interested medical students. The future Doctor Breitenbucher shares her experiences while participating in the program at her chosen international site: Kampala, Uganda.

I left Minnesota for Uganda with excitement and nervous anticipation. It seemed fitting, leaving just after the start of the new year. This was the start of a different kind of opportunity from the other experiences in my medical school education thus far. I had never been to sub-Saharan Africa before. I had done a public health internship in India after my first year of medical school, but I was excited to be immersed in a more clinical setting and to see patients in an entirely different cultural environment. This was also the first rotation in the final semester of my last year of medical school. A beautiful juxtaposition of new beginnings and new endings.

Landing in Entebbe and driving to Kampala, I was struck by how familiar and foreign things felt. India had prepared me well for some things: the constant stream of people, four-wheeled and two-wheeled transportation filling the streets, the roads dusty and in various states of repair and disrepair. I remember noticing the sheer volume of people on the roads at night. The streets of Kampala are always busy, but the city comes to life at night. Street vendors flock to every corner and square foot of road to sell everything imaginable: food; clothes; shoes; furniture; animals; anything that can be put in a bag or on the back of a boda-boda (the local name for a motorcycle taxi). This was going to be my home for the next four weeks, and home had never looked so different.

During my first week, I attended a tropical medicine course that was being taught and run by my faculty mentor. It was a useful primer to tropical medicine in East Africa. We had a multitude of lecturers, a mix of local Ugandan experts and visiting faculty from the US or the UK. We did field visits, including a refugee resettlement site, an Ebola quarantine center, and the IOM (International Organization of Migration) site for immigrants seeking resettlement in the US. I was startled to learn that immigrants and refugees are a large portion of the population in Uganda, with many people fleeing over the border from the Democratic Republic of Congo. The Ugandan government has set up a very stream-lined process for new arrivals to be initially screened and placed in temporary resettlement villages while they await final resettlement applications and plans. People arrive with plans to move on from Uganda, either to the US or Europe, but many often end up staying in Uganda, getting jobs and marrying local Ugandans. The resettlement village we visited housed 117,000 people, many more people than the intended capacity. In an area that has limited resources and with a large prevalence of malaria, tuberculosis, and the constant fear of Ebola or other hemorrhagic fever diseases, I was impressed with the multiple screenings and levels of interventions done to manage such high numbers of constantly-moving people in such close quarters where concerns of outbreaks and infection control are very real.

In the following weeks, I completed my clinical rotation on the Infectious Disease ward at Kiruddu General Hospital. I split my time rounding with the meningitis study team and the general infectious disease ward team, depending on who was rounding or how big each team was.

The people I saw at Kiruddu were unlike any patients I had ever seen. I had seen sick patients before. In the US, with the sickest patients, you can hardly see them lying in bed, as they are covered with catheters and IV’s and tubes; it takes some strategic planning if you want to approach the patient’s bedside as you dodge different machines, always being mindful of their airway tubing, their drains, gingerly moving limbs so as to not disturb the precariously perched apparatuses keeping them alive. In Kiruddu, a few patients had nasal cannulas connected to supplemental oxygen. Almost everyone had IV’s in their arms. The ward was just a large room, beds pushed against the walls and arranged in rows. Caretakers stood at the bedside––family members or friends responsible for helping to care for the patient––giving medications, tracking down results. There was no beeping of monitoring machines, no heaving sighs of ventilators, no IV pump alarms. Instead, the sounds of the traffic from the road below and the screeching birds filled the air in the ward room.

When a patient dies in the US, we go through the act of discontinuing care, disconnecting them from the machines, removing lines and drains, letting the patients pass with as much semblance of naturalness and normalcy as we can. There is very little to remove when a patient dies in Kiruddu. They feel so accessible, so exposed. It feels strange and uncomfortable to see someone die because nothing else can be done or be offered. There is no ceremonial removal of the airway or turning off of the monitors simply because they were never available in the first place. These patient experiences highlighted to me the ethical and moral challenges of working in a low-resource setting.

HIV is very prevalent in Uganda, and many patients in the infectious disease ward are HIV positive with opportunistic infections. The ward always had cases of cryptococcal or tuberculosis meningitis, and these patients were managed primarily by the meningitis study team. I was really impressed with the study team and their patient care. Seeing the partnership between the local Ugandans and the foreign study members highlighted the importance of giving back to the community, both in terms of the patients and the team members. The researchers had protected research time separate from their clinical duties to dedicate to their individual sub-projects. They were included in all of the publications and had their funding paid for to attend conferences or to submit manuscripts. Professional development and mentorship were priorities for everyone on the study teams.

I had the unique opportunity to attend a results dissemination event at IDI (Infectious Disease Institute), the research institute within Makerere University at Mulago Hospital that the study team was based out of. Patients who were enrolled in the studies were invited back to Mulago to celebrate the findings of these studies and for the study team to thank the patients for their participation. The theme of the event was consent and thanks; without the patients’ consent to be enrolled in the studies, the study team would not have been able to produce work and research that may change and save lives in the future. It was a very touching event, and many patients and their families remembered the study team members. It was a celebration of life and shared hope. It was also a beautiful reminder of why we do what we do, and why the “how we do what we do”, is important as well.

On my drive to the airport in Entebbe, the sunset perfectly silhouetted the hills of Kampala. The fiery orange and pink streaks of light just felt magical, a perfect African sunset. The lights from the traffic raced across the windshield. I looked out as the night life was just starting to awaken. Vendors were setting up their stalls for the night markets. People were already starting to line the streets, crossing the ditches, sprinting across the roads. The boda-bodas were everywhere, filling every crevice of space between the cars and pedestrians. It was a regular night in Kampala, one without meaning or significance to anyone but myself. The constant activity, the never-sleeping energy of this place was the same. But it was I who was changed, who felt different as I turned my gaze from the skyline of hills for the last time.

Learn More About the Global Medical Education and Research Program

Interested in GMER? Find out more about the program.