Minnesota Launches the Uganda Hub of Innovation to Foster Research, Education and Engagement with African Partners 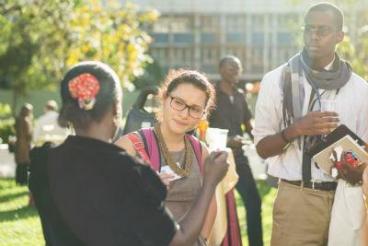 Tackling the devastating effects of global health phenomenon is central to the work of health scientists and educators around the globe. And no place is their work more critical than in Africa, where the onslaught of deadly epidemics like HIV/AIDS and Ebola, coupled with worsening environmental crises such as climate change and food scarcity, have affected generations of people and challenged leading scientists for decades.

A strengthened partnership between the University of Minnesota and Makerere University in Uganda aims to harness the collaborative expertise of leading health scientists and practitioners by establishing a centrally located innovation hub to better predict and prevent destructive health phenomenon in Africa and across the globe.

Grown from a long-standing partnership between the Minnesota and Uganda universities, the Uganda Hub of Innovation was formally launched in November 2015, becoming the first node in an emerging network of University of Minnesota global health hubs.

Spearheaded by the University of Minnesota’s Center for Global Health and Social Responsibility, the Uganda Hub – located in Uganda’s capital of Kampala – aims to leverage long-standing, cross-continental relationships to mutually strengthen local and international research talent, provide a platform to exchange knowledge, experience and skills, and to further solidify cross-cultural, interdisciplinary connections between academic institutions.

In November, dozens of researchers and educators from the University of Minnesota flew to the East African nation to celebrate the launch of the Uganda Hub and participate in a four-day scientific and networking symposium.

Budding researchers and revered faculty freely shared their academic curiosities while sipping on refreshments in hopes of discovering mutually beneficial opportunities to further their future work. 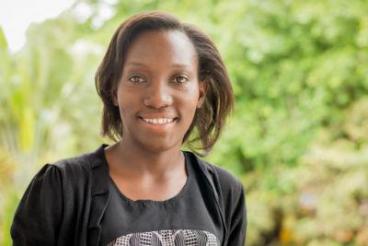 That opportunity was invaluable for Ugandan Pediatrician and former University of Minnesota Fogarty Fellow Ruth Namazzi who studies long-term effects of malaria treatment in children.

“As a young specialist, you kind of get lost in the whole swamp of researchers. This hub will help find us others to collaborate with,” she said.

As one of the leading infectious disease research organizations in Uganda, IDI is a key partner of the Uganda Hub collaboration. Since the University of Minnesota and Makerere University partnership was founded in 2005, IDI has hosted dozens of international health science students, fellows and practitioners specializing in HIV/AIDS treatment, as well as implemented several major clinical trials earning the Institute its reputation as a frontrunner in the fight against HIV-associated infections.

“For me, this is the partnership that has the hallmarks on what good partnerships are,” said Andrew Kambugu, Head of Research at IDI. “This partnership has been a platform that has driven us all to discover.”

Adding to Kambugu’s comments, Richard Brough, Executive Director of IDI said “the Minnesota/Makerere collaboration is one of the most successful partnerships in the relatively short history of IDI.

Emphasizing the importance of leveraging already existing relationships, resources and expertise in Uganda, Brough added, “We’re more efficient and effective together rather than singly.” 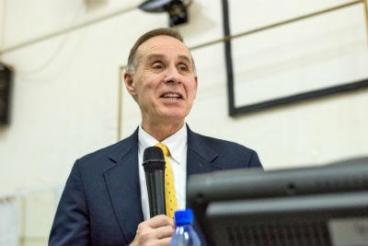 Also among those present at the Uganda Hub launch was Brooks Jackson, Senior Vice President for Health Sciences and Dean of the University of Minnesota Medical School.

Jackson, who began his HIV/AIDS research in Uganda in the 1990’s, has a long history of international research collaboration, particularly in Uganda where he helped establish the Makerere University-Johns Hopkins University Research Collaboration (MU-JHU), a nonprofit entity focusing on research, education and capacity building around HIV/AIDS issues. MU-JHU is a key partner for the Uganda Hub.

“If we’re going to rid Africa of infectious disease and address other pressing public health challenges we’re going to need a global effort,” he said. “Collaboration will expand our abilities to make a difference in the communities we serve.”

The symposium also marked a new chapter for Makerere’s College of Health Sciences, which is led by the newly appointed College Principal Charles Ibingira. Ibingira marked his first day in the new position by speaking to symposium attendees about the importance of uniting under a common vision of solving global challenges.

While the Uganda Hub already has a strong relationship with entities like Makerere University, increasing the list of partnerships in Africa - and around the globe – is a high priority for University of Minnesota leadership.

The prospect of expanding the Hub’s reach is exciting to Melanie Nicol, Assistant Professor at the College of Pharmacy at the University of Minnesota. Nicol, who studies the effectiveness of HIV/AIDS drugs, flew from Minnesota to Uganda to explore potential opportunities to work on clinical trials in Uganda.

“I’m a relatively young faculty and am still trying to establish myself,” she said, adding that collaborating on international pharmacology research has always been an interest of hers.

While the thought of tackling a challenging task such as implementing a clinical trial in Africa might have seemed overwhelming in the past, Nicol said the establishment of the Uganda Hub definitely makes the task feel less daunting.

“I think that’s (the Uganda Hub’s) role; to facilitate interactions and provide support once we’re here,” she said. “Having someone on the ground full time will be helpful.”

That’s exactly what Debra Olson, Executive Director at the Center for Global Health and Social Responsibility is hoping.

As one of the lead visionaries in the creation of the Uganda Hub, Olson said the Center’s future goal is to open access points to existing international collaborations “so when a new faculty member is interested in starting a new initiative or project, we have those connections.”

Additionally, helping Minnesota faculty and researchers identify local partners, assisting with hiring issues, obtaining work space and helping with overall logistics of a research study “so they don’t get stuck” will also fall under the Uganda Hub’s umbrella of work.

Building on the Past, Looking Forward

For Paul Bohjanen, Division Director of Infectious Diseases & International Medicine at the University of Minnesota, the future of the Uganda Hub looks promising particularly for emerging scientists in Minnesota and Uganda.

Bohjanen, who first started working in Uganda 10 years ago, said the relationships built in the last decade helped pave a smoother path for other talented researchers to pursue their critical work in Africa.

“These relationships have continued to grow and build, and I think that because of those relationships and that trust, we can do things much more easily than we could before,” he said.

Bohjanen said he hopes researchers from both arms of the international partnership will utilize their mutual resources and connections via the Uganda Hub.

“What’s more exciting to me is the possibility of developing new collaborations, new projects and creating new opportunities both from Makerere and Minnesota,” he said.

While disease outbreaks seem more and more frequent and overwhelming with each epidemic, those working on frontlines of such research remain optimistic their collaborative work will someday improve the prediction, prevention – and perhaps eradication of deadly diseases – if completed together, that is.

“We live in a global world and we face global challenges,” said Katey Pelican, associate professor and head of the Ecosystem Health Division in the College of Veterinary Medicine at the University of Minnesota. “These grand challenges that are so complex that no one person, no one discipline, no one sector can solve that.”

But given that Uganda is “on the front line” of solving some of these grand challenges, Pelican said collaborative efforts like the Uganda Hub will plug local researchers into an international network “led by our partners here in Uganda.”

That network, led by stable, well-established academic universities could, in fact, transform the future of Africa said David Kabasa, Principal of the College of Veterinary Medicine, Animal Resources and Biosecurity at Makerere University and the founding Director of the Africa Institute for Strategic Animal Resource Services and Development.

About the Uganda Hub

The Uganda Hub was established in August 2015 by the University of Minnesota Academic Health Center and is guided by the Minnesota-Uganda Partnerships Group convened by the Center for Global Health and Social Responsibility.

Anchored in a strong foundation of collaborative exchange since 2005, the Uganda Hub aims to increase regional and international engagement on pressing global health challenges using key partnerships and interdisciplinary connections created during the last decade.

The Uganda Hub is located in Kampala, Uganda with offices in MU-JHU Tower 3, Upper Mulago hill and in the IDI knowledge center at Makerere University.