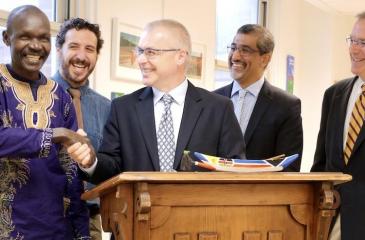 From Mfangano to Minnesota - A collaboration rooted in community

Twelve years after and eight thousand miles away from a chance encounter in Africa, two strangers-turned-colleagues and friends reunited on the University of Minnesota campus. The reunion in Minnesota marks a new chapter for the pair, positioning them to expand research and sustainable health solutions by formally launching the Mfangano Community Health Field Station @ the Ekialo Kiona (EK) Center in Kenya.

The partnership began in 2006 when Charles (Chas) Salmen, then an aspiring medical student, encountered two community leaders from Mfangano Island at a bus stop along the shores of Lake Victoria, Kenya. He accepted their invitation to visit their new organic farm on the island, located in the middle of the vast lake.

Among those Chas met on Mfangano Island was the owner of that farm, Joel Magioki Oguta, who spoke with Chas about the island’s links between the environment, the local economy, health, and the degradation of the residents’ native culture. Joel shared his vision to build a community center on Mfangano Island and, ultimately, donated the land that would become the Ekialo Kiona (EK) Center.

This resonated with Chas. With his perspective as a medical anthropologist, he appreciated how the impact of developing a community center on the island, in contrast to western health care’s focus on ”deliverables” and “return on investment”, could foundationally enhance health and wellness within a community that faced an existential threat to its people and culture. After a few weeks on the island, he “was hooked”.

Through a Rhodes Scholarship, Chas spent the next two years conducting ethnographic research on Mfangano Island. Throughout his medical studies, medical school graduation, and his residency with the University of Minnesota North Memorial Family Medicine Program, Chas and Joel continued to work with the Mfangano community to build the Ekialo Kiona (EK) Center and co-founded the Organic Health Response (OHR), an organization which supports the EK Center’s programs.

“From the day I met Joel, I have been impressed with his farmer’s wisdom, his courage, and his infectious humor." - Chas Salmen

Today, the EK Center has evolved to become the driving force of the island’s public health, technology, broadcast communications, and agricultural functions, as well as a space that promotes community and the island’s indigenous culture. To date, over 5,000 members have joined the EK Club through the Cyber-VCT program, where members can discreetly receive voluntary HIV counseling and testing (VCT), overcoming the stigma and scrutiny commonly associated with HIV testing centers in rural Kenya. The Health Navigation & Emergency Response program operates the region’s first emergency boat to address the lack of emergency transportation on Mfangano Island by providing first aid, urgent transport, care coordination, and patient advocacy. Other programs thriving through the Center include the Ekialo Kiona Suba Youth Radio (EK-FM) which broadcasts programs about health, agriculture, and culture in the native Suba language; and a demonstration farm highlighting how farming can be a viable, engaging, professional occupation while also nourishing people and protecting the island ecosystem.

In partnership with the U of M’s Center for Global Health and Social Responsibility (CGHSR), Chas and Joel led the development of the Mfangano Community Health Field Station @ the Ekialo Kiona (EK) Center, an academic collaboration to advance research, training, and community health programming on the island and beyond.

In September 2018, a CGHSR Travel Award enabled Joel to travel to the US for the first time. The occasion was marked with an official launch event to introduce University and community stakeholders to the friendship and to Joel’s mentorship of Chas, which are both foundational to the Field Station’s activities. The Field Station differs from so many global projects because it is driven by the community in which it operates. For University members to connect with the Field Station it is critically important for them to understand what drives activity: the health of the people and the ecosystem of the island.

Alongside the organic nature of the Field Station, the partnership was formalized through a  University-wide affiliation agreement between OHR-Ekialo Kiona Center and the University of Minnesota. The agreement will build upon the University’s and its students’ current involvement with the people of Mfangano Island to eventually include student fellowship opportunities for research, training, and community health. These endeavors will initially focus on: health navigation for maternal and newborn health; sustainable agroforestry and nutrition; community health promotion; mass communications; and linguistics.

“During my time I was honored to meet with various professionals from sectors across agriculture, medicine, and community health,” Joel says. “Most importantly, this trip allowed us to sign the official affiliation agreement to bring this field station into existence. I appreciate the University of Minnesota for supporting me towards my goals”.

“Joel traveled thousands of miles, the longest journey of his life, and represented his community with insight and inspiration,” Chas added. “In academic seminars, research planning meetings, an official signing ceremony, and on organic CSA farm fields and dairy farms, Joel activated deep connections that I know will energize our growing collaboration for decades. It was a highlight of my career to have the opportunity to host my friend and partner here at UMN.”