Addressing Racial Inequities in Health Outcomes During COVID and Beyond 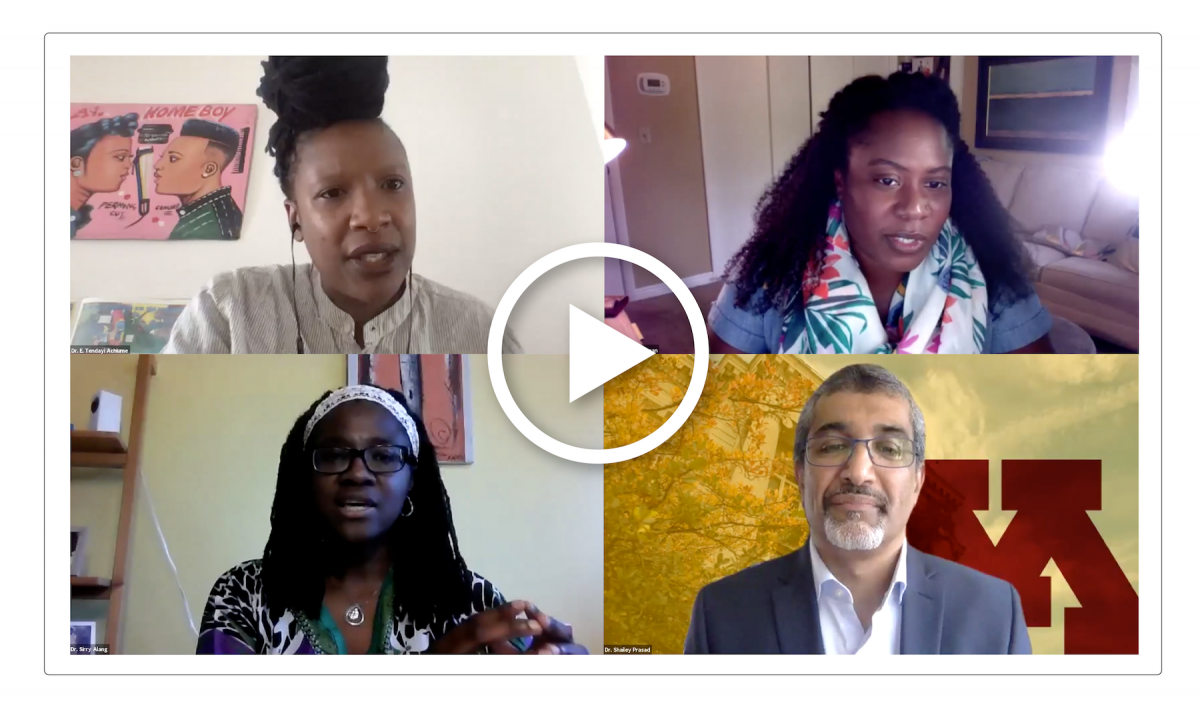 “Police brutality, racism, COVID-19, and maternal mortality do not exist in a vacuum. All of these are public health crises. We cannot separate or isolate one from the other– it is the same white supremacy and structural racism that exists across different systems. Our responses to each should be connected,” Sirry Alang, PhD, professor of sociology and health, medicine, and society at Lehigh University said during the recent webinar, “Addressing Racial Inequities in Health Outcomes During COVID and Beyond.”

Alang was joined by esteemed panelists E. Tendayi Achiume, JD, and Rachel Hardeman, PhD, MPH, to discuss racism as a public health issue on the webinar that drew over 500 attendees. The webinar was hosted in collaboration between the Center for Global Health & Social Responsibility and the University of Minnesota Human Rights Lab as part of the virtual series, “Envisioning the Future: Advancing human rights in a time of crisis.”

“The prevailing ethos in global health is about achieving health equity around the world. The disproportionate burden that communities of color face in our own backyard is a huge concern,” said Shailey Prasad, MD, MPH, executive director for the Center for Global Health and Social Responsibility.

“We are committed to engaging in discussions about this with the Human Rights Lab,” said Prasad.

Structural inequalities between Black and White Americans have always had devastating impacts, and these disparate health outcomes have become even more apparent in the COVID-19 era, where Black Americans are disproportionately affected by the disease. The simultanous cultural reckoning of the murder of George Floyd has ignited a national and global movement with racism at its core.

A Country Founded on Racism

“We can't figure out how we got here, if we don't understand our history,” said Hardeman, professor of health policy and management in the University of Minnesota’s School of Public Health. After defining structural racism as “the totality of ways in which societies foster racial discrimination through mutually reinforcing systems like housing, education, employment, policing, and criminal justice,” Hardeman explained that these practices are reinforced in the ways we are socialized.

Racism is visible in many institutions, including healthcare. The U.S. is the only industrialized country in the world that has a rising maternal mortality rate. Black women are three- to four-times more likely to experience maternal death.

“Racism is at the root of that,” said Hardeman, a prominent voice in reproductive health.

The U.S. From an International Human Rights Lens

It’s important to note the U.S.’s record of systemic racial injustice as it relates to international human rights law obligations.

“In the U.S., there is an emphasis on looking for an intentional bad actor— somebody who was racist in a moment that resulted in someone being treated differently. At the international level, there is a prohibition on indirect discrimination, which focuses on effects rather than intent. Prohibited discrimination refers not only to bad actors who are explicitly motivated by prejudice, but includes unequal or discriminatory outcomes,” said Achiume, a UN special rapporteur on contemporary forms of racism, racial discrimination, xenophobia and related intolerance, and professor of law at the University of California, Los Angeles.

“The International Convention on the Elimination of All Forms of Racial Discrimination contain the most comprehensive international legal framework for combating racism. The U.S. was involved in drafting this treaty but has also been absolutely terrible in enforcing those standards,” said Achiume. “Too often, the U.S. wants to take a leadership role on an international stage, but doesn’t want standards applied to it.”

Achiume believes one of the biggest challenges to fighting racism is denialism about the nature and existence of the problem.

“At an individual level, I think this moment is pushing for every person to really pause and take seriously, blind spots born of privilege. Just because you have not experienced something does not mean you can dismiss it,” said Achiume. “This moment shows us that systemic racism is neither imaginary nor understated. It is an urgent existential crisis. It’s killing people on a daily basis.”

Racism as a Public Health Crisis

Public health focuses on what we can do to prevent disease and ensure the health of a population. Racism leads to injury, death, mental illness, stress, and a host of other negative health impacts.

“Police brutality is a social determinant of health. It is broader than excessive use of force. It includes emotional and sexual violence. It includes psychological intimidation, neglect, and verbal assault,” said Alang. “Police brutality is a constant source of stress for communities that have been disproportionately policed. If every video you see that has gone viral is a video of somebody who looks like you, you don’t have to personally experience police brutality for that to affect your health outcome.”

“Police brutality affects emotional wellbeing and ability to function. You come into work and are expected to conduct business as usual. Somebody that looks like you was just killed for no reason. It takes a toll on your productivity and ability to enjoy simple things in life,” said Alang. “This moment is an inflection point in our nation’s history. I hope that we don’t go back to normal.”

View the Addressing Racial Inequities in Health Outcomes During COVID and Beyond webinar.

This post was written by Gao Vang and originally published by the UMN Office of Academic Clinical Affairs on July 16, 2020.